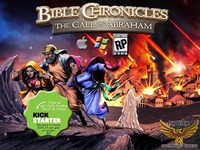 The first campaign is titled “Judeo-Christian Video Game – Moral & Fun – Call of Abraham.” Which describes itself as:

A spiritually-enriching, action-packed, FUN Judeo-Christian role-playing video game you can be proud to give to your loved ones! 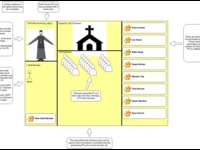 The second is “Grow Your Congregation (Web Based Game),” and its description is:

We would like to see an addictive Faith inspired game that could be compared to Mrmine.com or Cookie Clickers.

Neither of these projects is going to reach their funding targets, without a bona fide miracle.

Call of Abraham states it is a “game you can be proud to give to your loved ones.” Grow Your Congregation says “We have yet to see a faith inspired game that people with faith could be proud to play.”

American evangelical attitudes to video games are roughly where its attitude to popular music was in the 70s. And the subculture had a great money spinning success in its invention of “Contemporary Christian Music”, or CCM (for which I’d very much recommend this synchroblog from last week). CCM didn’t convince many people outside the ghetto, but it allowed Christians to have pride in their music.

I totally get that. When I became a Christian in my teens, I was deeply into CCM. I subscribed to the magazine, went to gigs, bought the records. That CCM was derided outside the ghetto didn’t bother me. The point was that it was just good enough to allow me to have pride in it.

Christian gamers know that Christian Video Games are terrible. There have been many of them, promoted in language just like these Kickstarters. They are mostly a joke even within the subculture. That’s why pride is such a heartfelt need: the promise of a game that won’t be embarrassing to own. Not one that can compete with secular games or bring the Christian message to the wider world (the blurb explicitly says these are for “people with faith”), but one that reaches the lofty bar of not being total crap.

Now is the right time for this in games, I think. The last few years has seen a fundamental shift in the economics of game development. Independent game developers now top the “Game of the Year” lists. For a budget roughly equivalent to recording an album and promoting a new CCM artist, you can bring an Independent Game to market. It wouldn’t surprise me to see someone make this breakthrough, and transform the Christian Video Game from a joke even within its own sub-culture, to something that makes money.

The two Kickstarters above are like case-studies for how to make bad games, however. If, by some miracle, either got funded, there are enough details in the Kickstarter campaigns to know the result will be more embarrassing crap. There’s something fundamentally wrong-headed about how Christian Video Games are conceived. It is as if the CCM pioneers of the 70s couldn’t get past the fact that Christian music had to consist of Hymns played on a Pipe Organ, with a few guitars and drums added for good measure. In the same way Christian Video Games are Sunday School Lessons with added graphics.

But someone will get it eventually. And American Evangelicals will have their dearest wish: pride in the produce of their ghetto.

Anyone want to show me I’m wrong and point me at a Christian Video Game that doesn’t suck?